​Serving the Spokane Metro area and the Inland Northwest since 1994!

Roughly how much will this cost?

The concept is simple. The results are amazing!

​Many of my customers first ask, "Does it matter whether you call it window film or window tint?"  And the answer is, "No, they both mean the same thing". The term "window tint", however, is more often used to refer to film used in automotive applications, and the term "window film" is more commonly used for residential and commercial film applications.

​No matter what you call it, window film or window tint consists of a laminate of strong polyester and metalized or ceramic coatings bonded by adhesives. There is a scratch resistant coating on one side; a mounting adhesive layer and a protective release liner on the other side. When the release liner is removed, the side of the film with the adhesive is applied to the interior surface of the glass. This mounting adhesive may be either a Pressure Sensitive Adhesive (PS) or a Clear Dry Adhesive (CDA) depending on application.  Window film/Window tint can be clear, colored, or patterned to blend with various design schemes. Various thicknesses are available for solar, safety, or security applications.​

So, how does Solar Control Window Film do what it does?

Solar control window films for homes and commercial buildings help control the sun’s radiant energy, reducing the influx of heat, enhancing outward visibility by reducing harsh glare, and nearly eliminating the damaging and dangerous effects of ultraviolet light on our skin, eyes and interior furnishings.  For purposes of this tutorial, Solar radiation from the sun can be divided into three primary radiant components; visible light that we can see, infrared (heat) rays that we can feel once they strike an object, and virtually undetectable ultraviolet (fade) rays.  As solar radiation strikes a piece of clear glass, 100% of the radiation presented is either reflected away from, absorbed at the surface of, or transmitted through the glass (See Image 1).  When applied to clear glass, window film slightly alters the above equation by reflecting much more radiation (mostly infrared) away, by absorbing slightly more at the surface of the glass, and by transmitting a slightly reduced amount of visible light and much less heat (See Image 2).  Window tint has the added advantage of blocking more than 98% of dangerous, destructive, UV rays.  The amount of heat and light rejected, as well as the amount of visible light transmitted, is dependent on the type of window film selected.​ 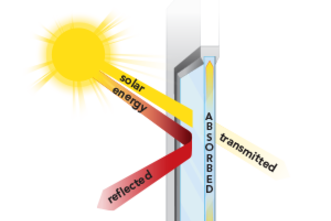 Ask About Our One Of A Kind Low-Price Guarantee!

Review us on Trustpilot! 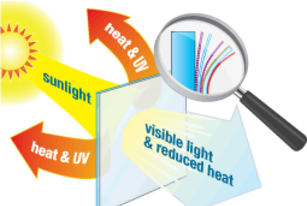 Read this page to find out how window film works. Whether you are considering tints for your home or office, gain peace of mind by understanding how solar contol, UV, privacy and decorative window films do what they do.

Get Your Free, No Obligation Quote Today!

Directory of Products and Services